Please direct any questions you may have to Corey’s attorney. 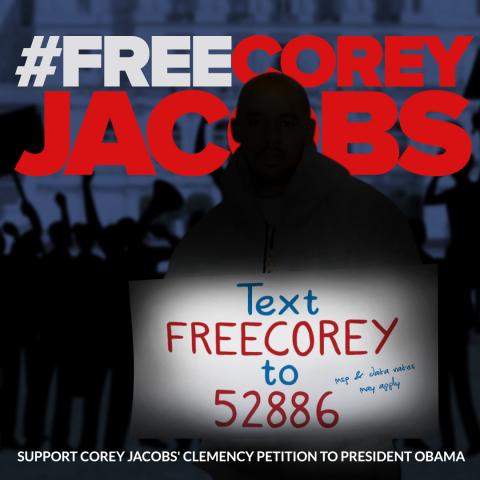 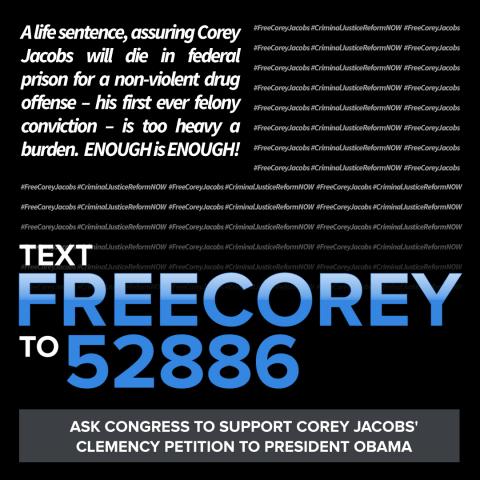 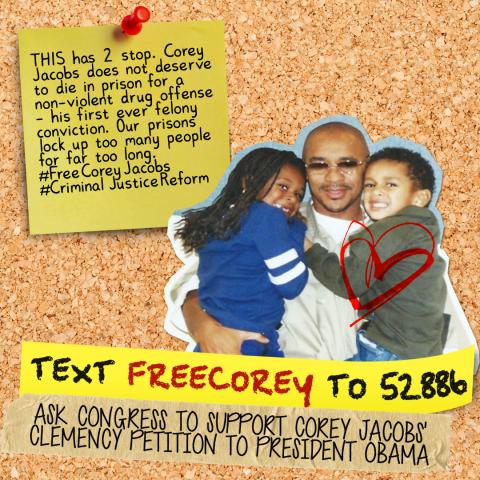 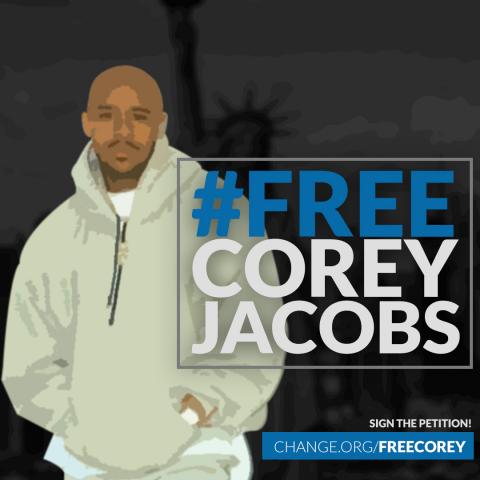 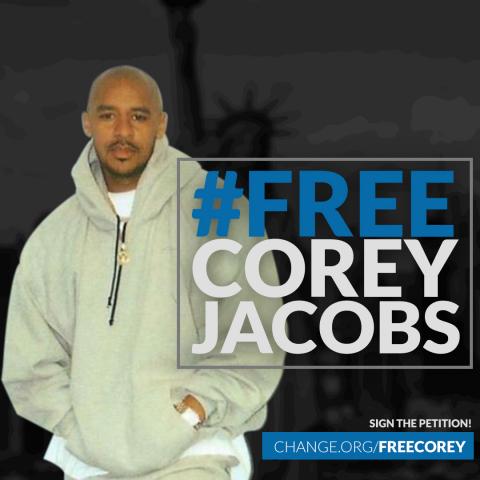 WHAT IS THE STATUS OF COREY’S CASE?

WHAT IS THE DEPARTMENT OF JUSTICE’S NEW CLEMENCY INITIATIVE?

Recently, the Department of Justice announced a new clemency initiative to encourage qualified federal prisoners to petition to have their sentences commuted, or reduced, by the President of the United States. Under the new initiative, the Department will prioritize clemency applications from federal prisoners who meet all of the following factors:

President Obama has shown he is committed to restoring the sense of fairness at the heart of our justice system. As of today, he has granted commutations to a total of 187 deserving people – more than the last five presidents combined.

Additional insight into the new clemency initiative can be found here

WHO SHOULD WRITE A LETTER OF SUPPORT FOR COREY?

Anyone wishing to write a letter of support for Corey should do so.

WHO SHOULD I WRITE A LETTER OF SUPPORT TO?

Write either the President, the Pardon Attorney, or BOTH.

WHAT FORMAT SHOULD I USE FOR MY LETTER?

Your letter should use proper letter format and be no longer than 1-2 single-spaced pages.

Put the date first, then the name of the person you are sending the letter to, then a subject line.

For example, the beginning of your letter should look like this:

OR if you write to the President use this address:

WHAT SHOULD BE IN MY LETTER TO THE PRESIDENT?

Your message to the President is critical to Corey’s success.

First Paragraph: Use this paragraph to get directly to the point. For example, I am writing in support of Corey’s pending clemency petition. Corey has served over 16 years in prison for his role in a non-violent drug conspiracy. This was his first ever felony conviction and he has more than paid his debt for his crime. Keeping Corey in prison for the rest of his life serves no useful purpose to himself or to society.

Second Paragraph: Establish your connection to Corey. For example, I learned about Corey’s case through [his family, a friend, his website, social media] OR I grew up with Corey in the Bronx OR I have known Corey since [high school, college].

Then explain why Corey deserves clemency. Please review this entire website for an in-depth look into Corey’s story and extensive rehabilitative accomplishments.

Below are examples of reasons why Corey deserves clemency you may wish to include in your letter.

Third Paragraph: Summarize and reiterate that Corey does not deserve to die in prison. For example, There is no doubt that drugs harm our communities, but a life sentence for a non-violent drug conspiracy is too harsh. Corey accepts responsibility for his actions and has shown over the past 16 years in prison that he is deserving of a second chance. His continued incarceration is truly a waste of human life and taxpayer dollars. Corey does not deserve to die in prison for a non-violent drug offense. I pray that you mercifully consider Corey’s pending clemency petition and give him the opportunity to re-enter society and prove that he has learned from past mistakes. Thank you for your time regarding this urgent matter.

EXTREMELY IMPORTANT: DO’S AND DON’TS OF WRITING A SUPPORT LETTER

Be SURE TO make the letter your own. Corey’s sentence is gravely unjust and he is truly deserving of a second chance. Write from your heart and just let the words flow naturally.

It is very important that you DO NOT:

Remember that a request for clemency is a plea for mercy. Your letter must be compelling but respectful. We do not want to offend the President, the judge, or anyone involved in Corey’s case. Be passionate but very polite in your letter. 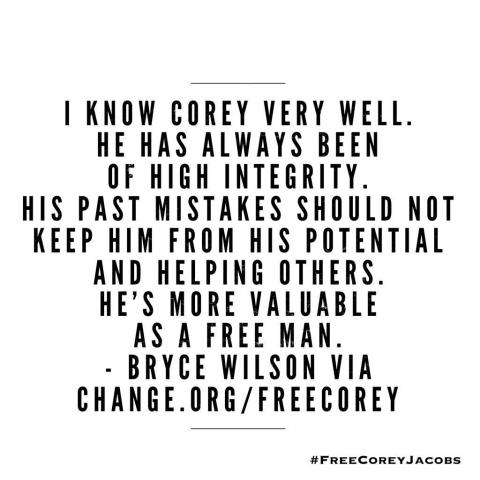 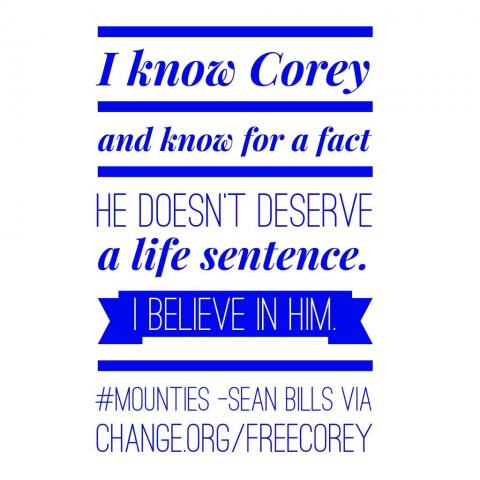 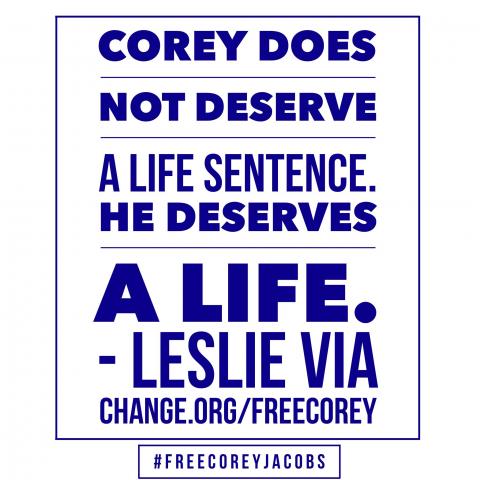 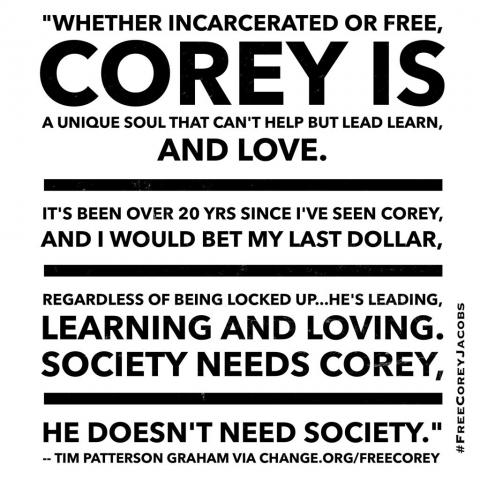 Because life in prison for a non-violent crime is too harsh. I personally know Corey Jacobs. He was my celly and a great guy. Corey will be an asset to the community. I learned a lot from Corey and I've been out 5 months and I'm doing great and I give credit to Corey because of the knowledge and wisdom he shared with me. He genuinely cared about my transition from prison to the community. Corey Jacobs deserves a second chance! Corey Jacobs had never even been in trouble with the law other than now, and to get a life sentence!!....It just isn't fair he's already done 16 yrs. Corey Jacob deserves relief...

I see many cases like this where young, non-violent, first time offenders are given life sentences, as if their lives mean nothing and rehabilitation is not a possibility for them. Although we may not be able to save them all, we now have the chance to help Corey's most important dream become a reality and allow him the chance to prove to the world that his life matters and that his past mistakes don't define who he is as a man 16 years later.